SLA is the world’s first 3D printing technology. Stereolithography was invented by Chuck Hull in 1986, who founded the company 3D Systems.

SLA 3D Printed uses a laser that reflects through the mirrors till reaches the vat of resin, once the laser hits the resin, the resin selectively cures and solidifies, and layer by layer is built it up till the object is completed.

FDM is the most commonly used and affordable type of 3D printing technology globally.

The way it works is that a filament is loaded into the 3D printer and fed through to a printer nozzle in the extrusion head. The printer nozzle is heated and a motor pushes the filament through the heated nozzle, causing it to melt.

The printer then extrudes the melted filament into the build plate, adding a layer by layer, where it cools down and solidifies, this process repeats till the object is completed.

In the Multi Jet Fusion printing process, the printer lays down a layer of material powder (PA12, Pa11, or TPU) on the printing bed. Following this, an inkjet head runs across the powder and deposits both a fusing and a detailing agent onto it.

An infrared heating unit then moves across the print. Wherever a fusing agent was added, the layer melts together, while the areas with the detailing agent remain as a powder. The powdery parts shed off, which produces the desired geometry. This also eliminates the need for modeling supports, as the lower layers support those printed above them.

To finish the printing process, the entire powder bed and the printed parts are moved to a separate processing station. Here, the majority of the unfused powder is vacuumed up, allowing it to be reused instead of producing excess waste.

SLS is creating an object with powder bed fusion technology and polymer powder.

When the entire section is scanned, the build platform will move down one layer thickness in height. The blade deposits a new layer of powder on top of the recently scanned layer, and the laser will sinter the next section of the object into the previously solidified cross-sections.

These steps are repeated until all objects are entirely manufactured. The powder that hasn’t been sintered remains in place to support the object, which reduces or eliminates the need for support structures and later can be re-utilized.

Binder jetting 3d printer process is when an industrial printhead selectively deposits a liquid binding agent onto a thin layer of powder particles mostly sand, ceramics, or composites. This 3D Printing technology is mostly used for the production of figurines and colored prototypes in Dubai.

Polyjet 3D Printing technology jets tiny droplets of liquid photopolymer into a build tray, where they are instantly cured by ultraviolet light.

DLP 3D printers are almost the same as SLA. The difference is that DLP uses a digital light projector to flash a single image of each layer all at once, the light is projected onto the resin using light-emitting diode (LED) screens or a UV light source (lamp) that is directed to the build surface by a digital micromirror device (DMD).

We are the most technologically equipped 3D printing company in Dubai. If you would like to print your parts in any of the above 3D Printing material or technology we can help you! 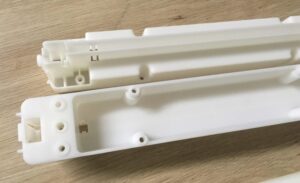